Why you need to own your foot

The foot is the “root” between the body and the earth

Believe it or not your foot is one of the larger and more important sensory organs of the body, sitting behind the hands, fingers, tongue and lips;  especially when put in to context of the cortical sensory homunculus, the diagram depicting our sense of touch and vital feedback mechanisms to the Central Nervous System (CNS).

During movement i.e. walking, the foot is the key stone on how movement of all the bones of the lower extremities and beyond occurs during our everyday lives.

It is an intricate mechanism. It re-distributes force and cushions the body, it adapts to uneven surfaces, provides traction for movement, gives awareness (afference) of joint and body position for balance, and finally provides leverage for propulsion.

The ability of the foot to accommodate the surface it stands upon, yet maintain stability of support to the body is accomplished by many complex features.

Yet these features are, in our opinion, seldom considered or catered for during diagnostics of knee, hip and back complaints; nor training programming and most of all creation and selection of footwear.

The bones are held together by ligaments and to a lessor extent muscles, such that in a ‘normal’ foot none of the bones between the heel and the heads of the toes transmits weight directly to the floor, rather being suspended by 3 arches; 2 longitudinal and 1 less obvious transverse. The arches protect the foot by re-distributing pressure.

When this complex and intricate mechanism is combined with movement

Within the 3 planes  (sagittal, frontal and transverse) of motion, a sequence of events should occur; allowing it to be rigid or equally flexible when necessary, in turn translating (either creating or accepting) rotation of the bony structures of the leg and beyond above it.

For ease of consumption, when we strike the heel during walking gait the rear foot moves away from the mid-line of the body (eversion). In turn this allows the mid-foot and fore-foot to rotate and ad-duct towards the mid-line of the body, better known as pronation, in doing so “un-locking” the joints and becoming flexible to adapt to the ground below it.

The upward influences of this motion within the foot, drives the lower leg to internally rotate, but not as far or as fast as the Talus,  through the tibia and fibula (surprise, the knee rotates), into the femur and on into the hip, pelvis and spine, dispersing force as it does so.

As we continue our stride forward transferring our weight through the mid-foot and on into the fore-foot from the middle of the stance phase and onto push-off phase of gait, the series of motion from the pelvis then reverses; driving the femur in to external rotation, creating the tibia and fibula to follow suit, causing the rear-foot to rotate towards the mid-line of the body (inversion) thus, supinating the mid and fore-foot locking it in to a stable structure allowing it to provide propulsion. Any dysfunction within any of the 3 compartments will reduce efficiency of propulsion or pressure distribution requiring other structures to consume the strain, over-time resulting in injury.

The biomechanics of running differ substantially from those of walking. Joint range of motion, muscle activity and joint reaction forces all vary primarily on the basis of speed and often from one step to the next. The gait cycle adds in an additional phase – the float phase, the duration of which also varies dependant on speed.

The nature of relative motion between the feet, ankle, leg and beyond will remain roughly the same in  terms of direction (i.e. transverse plane of motion in that internal rotation will occur of the leg and pelvis during strike and external rotation during push off) but it is yet to be well quantified in comparison to the data captured during walking gait cycle. There are too many variables between individuals to draw true conclusions i.e. majority of individuals remain heel strikers, some are mid-foot and some of fore-foot during a medium paced run, this changes again as speeds up to those classified as sprinting are reached.

But hold on, isn’t pronation is a bad thing? Wrong!

When the body is moving, the foot is indeed supposed to pronate!

The degree of pronation will vary depending on speed and your specific foot strike positioning, along with a whole other heap of relative motion and muscle engagement metrics etc.. 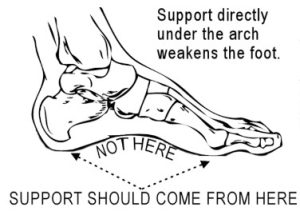 Unfortunately, due to our reliance on modern crutches (i.e. shoes, orthotics etc.) the ligaments and muscles which controls the amount of pronation and its return of the foot back to “neutral” becomes lazy and lax, thus often resulting in a foot which is continuously un-locked or “over-pronated” and thus more reliant on said shoes and orthotics.

In a brief side note which could be discussed in much greater depth, questions should be raised over the accuracy of those sports shoe “clinics” who claim to assess your feet to ensure the best shoe for your needs is found, especially when it is done in a static nature. Similar your multi-sport or running coach assessing your running gait should also only proceed once their understanding of real and relative motion and its widely varied attributes with no solid scientific data support, has been soundly validated.

So, should I ditch my orthotics?

Not necessarily (unless they are over 6months old, then yes – but this is a whole different conversation piece).

And yes, we know, we know; it is claimed that whole teams of specialists and research places hundreds and thousands of hours into the creation of the latest running shoe. Cool story!

Please tell us why, oh why, we need to place 2+ inches of the latest air filled foam, with this arch stabilisers and that stabilisers with unique lacing patterns,  between our sensory organs, with its own in-built cushioning system, and the ground which has worked perfectly well for our fore-bearers until very recently?

As with everything balance is required, and the pendulum needs to be brought to centre.

Once the true knowledge on how the body functions is understood, you have no choice but to really question the marketing claims that are being made around these items, especially when we have a continuous rise in complaints surrounding the foot, ankle, knee, hip and back, which they all claim to attest.

We “train” our hearts (cardio), we “train” our muscles (weights), but every single “latest and greatest” training methods and/or clinical treatment approaches fails to recognise and cater for the tool that connects our meat-bags to the structures we transverse on a daily basis, our feet. It is clear, regardless of the “supporting research”  they cannot overcome our base genome and cannot replace good, structured, and mindful internal training of our feet in lieu of our lack of all-day movement. 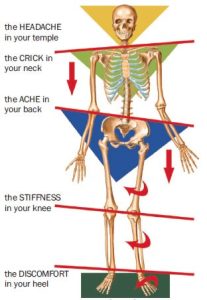 If you want to get on top of that re-occurring plantar fasciitis, weak ankle, or niggling knee and back pain then first you MUST own your feet.